History of the Foundation

The Alli Paasikivi Foundation works to increase the social security of families in our society. 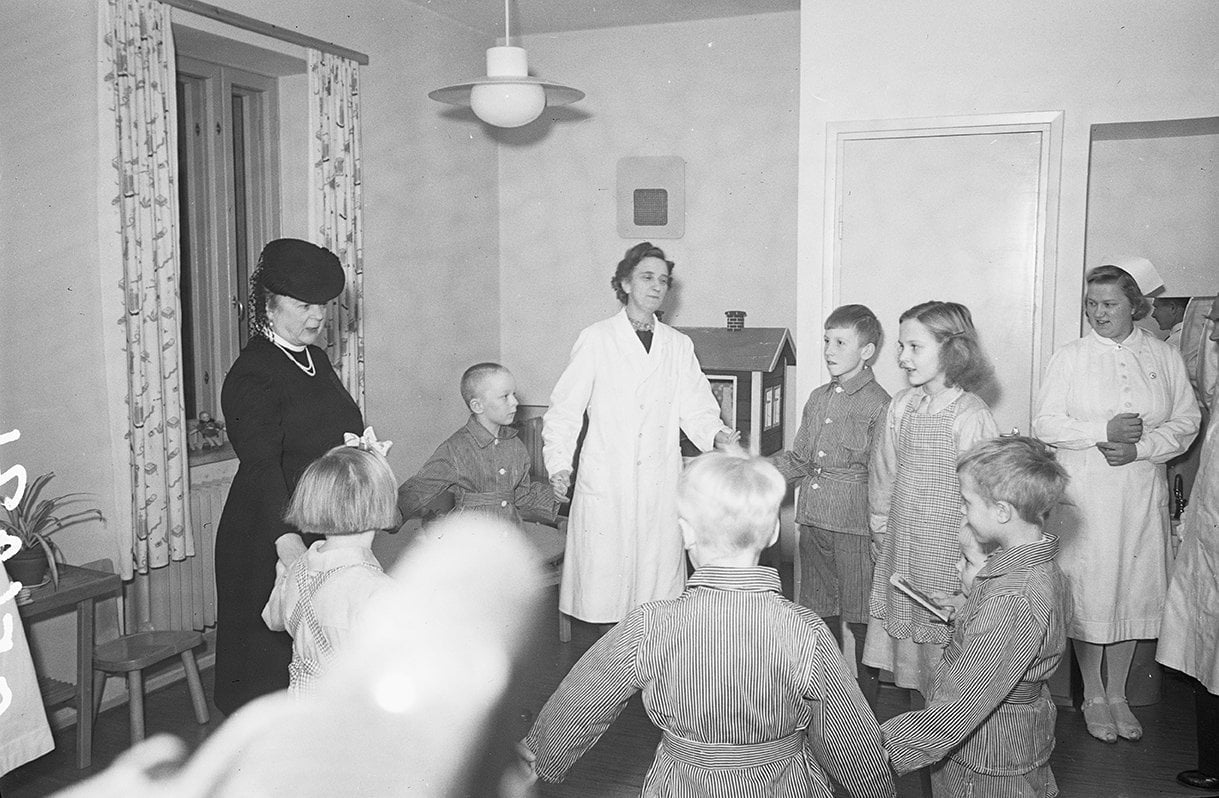 The Board of the Foundation

Since 2018, the chair of the Foundation has been Pirkko Lahti, Lic. Phil., and Docent Ismo Söderling has been vice-chair. The other board members are Prof. Helena Kääriäinen, Elina Rantanen, PhD, Pekka Perttula, Sc.D., Docent Pasi Saukkonen, Prof. Piia Jallinoja, and Maria Kaisa Aula, MMSc. The foundation’s secretary is Petra Kouvonen, Sc.D., and the treasurer is Piia Latvala, MEcon.

Alli Paasikivi (1879–1960), the spouse of the President of the Republic of Finland, served as the patron and honorary chair of the Alli Paasikivi Foundation during 1952–1960.

The Alli Paasikivi Foundation was established on September 20, 1952, and its bylaws were approved by the Ministry of Justice on October 1, 1952.

The founding members consisted of Prof. Vieno Johannes Sukselainen; Yrjö Laine, Senior Adviser in Industry; and Leo Kaprio, Lic. Med. Alli Paasikivi, as the wife of the President of the Republic, had agreed to serve as the Foundation’s patron and honorary chair, a position she held until her death. The Foundation’s four board members, appointed by its founders in accordance with the bylaws, were Katri Laine, PhD; MP Martta Salmela-Järvinen; MP Aino Luostarinen; and Heikki von Hertzen, Master of Laws. In addition to the members invited by the founders, the honorary chair appointed professors Severi Savonen, V.J. Sukselainen and L.A. Puntila. Katri Laine, PhD, was elected the Foundation’s inaugural chair and Prof. V.J. Sukselainen as the first vice-chair.

The founders made a gift of FIM 100,000 to the foundation. In 1952, upon a proposal by the Ministry of the Interior, the Government of Finland decided to transfer to the Foundation the funds of the dissolved Lotta Svärd organization, which had ended up with the Ministry of the Interior after the war ended. By the end of 1952, the Foundation thus received FIM 75 million (about € 2.5 million), of which FIM 14.7 million was in securities.

The Foundation’s bylaws characterize the Foundation’s task as follows: “The Foundation’s mission is to support and advance the societal work and activities that the Honorary Chair, in her role as wife of the President of the Republic, carried out with such exceptional dedication and warmth. To further this purpose, the Foundation will work to enhance the social security of families and to elevate the material and spiritual standard of Finnish homes.”

“In order to achieve its objectives, the Foundation shall seek funds and distribute them by awarding grants and financial support towards, among other things, projects to raise general civic and social responsibility, improve the livelihoods and standard of living of needy population groups, improve housing and living conditions, promote the care and vocational education of children and youth, and support research and education related to the economic and social issues affecting the domestic sphere.”

During its first fifty years of operation, the Foundation awarded 646 grants or financial support aimed at these purposes.

Alli Paasikivi had not been a lotta – one of the voluntary female auxiliaries during the war – and she was not a close associate of the organization’s founders. Nor was the National Coalition Party (the party of the President) involved in the initiative. The invitation to Alli Paasikivi to lend her name to the Foundation was done for political reasons. President Paasikivi had the trust of Moscow, and none of the other parties criticized Alli Paasikivi or her family, and her involvement allowed the Foundation to operate in peace within the domestic political sphere. Her reputation as an advocate for the protection of children and other social initiatives lent credibility to the Foundation’s mission.

Alli Paasikivi was an active participant in the creation of the Foundation’s bylaws and grant-making policies. She advocated for giving support to organizations working with disabled war veterans, which reassured the former female war volunteers, who had wanted to transfer their organization’s remaining assets to the Finnish association for disabled war veterans, Sotainvalidien veljesliitto.

On Alli Paasikivi’s initiative, the Foundation’s press conferences were held at the Presidential Palace, where it was easy to attract journalists. This publicity helped establish the reputation of the Alli Paasikivi Foundation as one of the key funders of civic activities in the social realm.

According to its bylaws, the Foundation would continue the work carried out by Alli Paasikivi. The work had to be such that it improved the social security of families and raised the material and spiritual standard of the Finnish home. The bylaws listed a number of goals, such as improving the state of the citizenry and the standard of living of those in need, improving living conditions, protecting children and caring for youth, advancing vocational education, and fostering research and education related to all of these areas.

Each one of the Foundation’s constituencies were thus taken into account. A three-year plan was drawn up to achieve the goals. The basic principle was to award grants to national entities, instead of grants to individuals.

The Mannerheim League for Child Welfare, the Finnish Scouts, and other youth-related initiatives were prioritized when distributing the grants. Väestöliitto, the Family Federation of Finland, also received grants, as did research projects in home economics and sociology. The aftereffects of the war were addressed by allocating funds to Sotainvalidien veljesliitto, the Finnish association for disabled war veterans, and to the children of those disabled in war, for their vocational studies. The foundation for pediatric research, Lastentautien tutkimussäätiö, received significant sums almost every year.

The Foundation’s board was well aware of the most critical needs of the post-war era, as the damage caused by the war was still being repaired and the welfare state was only in the process of being established.

Dispute over the assets of the dissolved Lotta Svärd organization

The women’s national defense organization, Lotta Svärd, was dissolved pursuant to the 1944 peace treaty. About one third of its assets were confiscated to the state. The Lotta organization had managed to donate partial assets to the Finnish Women’s Welfare Foundation (after 2004, the Lotta Svärd Foundation). The confiscated funds were argued over with SKDL, the Finnish People’s Democratic League, both in Parliament and through the court system. According to the political left, the funds should have been channeled directly into the state budget or to other “genuinely democratic” organizations.

In the end, the solution was found in the Associations Act, which the Constitutional Committee interpreted in such a way that the funds could be directed toward licensed activities that were closely aligned with those carried out by the Lotta Svärd organization.

With the help of the funds, the Alli Paasikivi Foundation was established on September 20, 1952. The entities behind the idea included were Väestöliitto, the Family Federation of Finland, as well as individuals who were closely associated with the Agrarian League and the Social Democratic Party, including J. V. Sukselainen and Martta Salmela-Järvinen. Public debate regarding the fate of the Lotta Svärd funds subsided, and the newly formed foundation quickly became established and gained the public’s trust.